From Wikipedia, the free encyclopedia

The Kenyan passport is issued to Kenyan citizens in accordance with the Constitution of Kenya, 2010 and as provided for in the Kenya Citizens and Immigration Act that commenced on 30 August 2011. In addition issuance process is regulated by Legal Notice No. 64 (the Kenya Citizenship and Immigration Regulations, 2012). If eligible, an individual can apply for a New Passport, Renewal Passport and Replacement Passport. Passports are issued by the Department of Immigration. The department is under the Ministry of Interior and Coordination of National Government. Kenyan passports are usually used as a form of ID as well and would be rated as second to The Kenyan national ID card.[2] Before Kenya get independence from Britain, British passports were used. [3]

As of September 2017, Kenya commenced issuing the new East African format ePassport. Directorate of Immigration and Registration of Persons, Gordon Kihalangwa, said on a live Twitter chat that tracking individuals’ movements will become easier with the ePassport. This is inline with digitization of Kenya. The new e-systems will improve efficiency and rid out loop holes and enhance security this one of Kenya’s goal in vision 2030. The new bio-metric passport contains the holders bio-data such as finger prints, digitally stored photo and signature among others.

Features of the Kenyan Bio-metric passport;

Also to be noted is that the new color adopted on the Kenyan ordinary passport, Light blue are the official colors of the East African community. The new ePassport will be available as of 1 September 2017. The old ordinary passport will be phased out by 31 August 2019 (extended to 1 March 2021)and they will be rendered unusable and cease to being recognized as travel documents. Holders of existing old format passports are strongly advised to apply for the new ePassport before this date. All new passport applications are processed via the Kenya Government E-citizen portal https://immigration.ecitizen.go.ke/index.php?id=4. 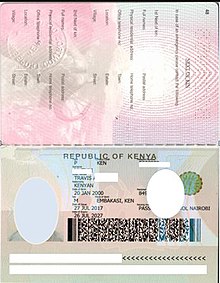 Ordinary Kenyan passport, due to be phased out on 31 August 2019

According to the department of immigration under ministry of interior and National coordination, and read together with the Kenyan constitution. Kenyan passports are valid for ten (10) years after date of issuance. Also to be noted is, children and persons under eighteen (18) years are required to have their own government issued passport separate from the parent. Minors application is done on the parents e-citizen account and clearly one selects “minor application”. Fees are the same as for adults and validity is also ten (10) years.

The Kenyan passport is valid in all Commonwealth countries and all foreign nations of the world.

Citizens of the East African Community Partner states who are abroad should at the earliest opportunity register their names and addresses to the nearest Republic of Kenya Mission abroad or where there is no Republic of Kenya Mission, with the nearest East African Community Partner State Mission or where there is no such Mission, with representative of a friendly country. Changes of address or departure from country should be notified. Failure to do so may in a period of emergency result in difficulty or delay in according them assistance or protection. (written on pages:32in English, 33 in Swahili, 34 in French) [4]

The passport remains the property of the government of Kenya and maybe withdrawn at any time. It is a valuable document and should not be altered in anyway or allowed to pass in to possession of unauthorized persons. If lost or destroyed, the facts and circumstances should be reported immediately to Passport office, or the nearest East African Community Partner state Mission abroad or other representatives and to the local police. (noted in page 31-in English, Swahili and French)[4]

Kenya has two official languages, English and Swahili, and in all government and legal documents both languages are used.

In the Kenyan passport, French is also used.

There are three types of passports:

valid for six months and usable for multiple entry into: Tanzania, Uganda, Rwanda, and Burundi.[5]

East African passport only for Tanzania, Uganda, Rwanda and Burundi

The pages of Kenyan passports are watermarked with the Kenyan coat of arms. The pages feature designs with the ‘big five game‘ animals commonly found in Kenyan national parks and reserves: the lion, elephant, leopard, rhino and Buffalo.

The inside front cover of the passport shows the East African logo with the word “Passport No.” in English, Swahili and French. And in bold letters and numbers the passport number. The second page shows the words “East African Community” and “Republic of Kenya “, In bold, uppercase letters.

Then the notes read first in English:

These are to request and require in the Name of the President of the Republic of Kenya all those whom it may concern to allow the bearer of this pass freely without let or hindrance and to afford the bearer such assistance and protection as may be necessary.

The second page of the Kenyan passport has the following:

Since 1 September 2017, Kenyan passports have had a contact-less smart card (proximity card) chip and 13.56 MHz loop antenna embedded in the front cover page, in accordance with ICAO standards. The chip and antenna and are not visually recognized, but their presence is indicated by ICAO bio-metric passport symbol at the bottom. It carries all the bio-metric data printed on the passport, JPEG file photo, digitally protected by a signature. Also an alphanumeric pseudorandomly assigned high-entropy serial number which is 45 bits. This improves the crypto-graphic strength of the basic access control (BAC) mechanism of the RFID chip, which makes brute force attack near impossible. [4]

Application for all passport services is done online via https://www.ecitizen.go.ke/ For a new applicant, the process starts with creation of an account on the online portal. An applicant cannot use someone else’s account because the account creation details are the official first name and national ID number. Additionally, an applicant must print the online application, and copies of the payment invoice, then present these and other documents in person. Issuance of new passports usually takes place at least 1800 working days after the application is received.[6] Even though the Kenyan immigration website says 10 working days, they are often severely under staffed and this is inaccurate. In order to apply for a passport, one would need:

According to the Kenyan constitution, a person can be a Kenyan citizen by birth or by registration. The new constitution of 2010 unlike the previous one, allows a Kenyan citizen who acquires another country’s citizenship after 27 August 2010, to have dual citizenship. He/she is required by law to immediately declare his status by completing:

Persons who lost their Kenyan citizenship before 27 August 2010 are entitled to regain after filling:

As of February 2018, Kenyan citizens had visa-free or visa on arrival access to 72 countries and territories, ranking the Kenyan passport 67 in terms of travel freedom (tied with the Omani passport) according to the Visa restriction index.