You might find yourself on the passenger seat of your own vehicle and a police officer on the driver’s.

This comes after The Kenya Police Service, clarified that it is lawful, under the Traffic Act, for a police officer to enter any vehicle, drive any vehicle or cause any vehicle to be driven upon reasonable suspicion of any offence under the traffic act.This information was shared via tweets and included screenshots of the Kenya Traffic Act. 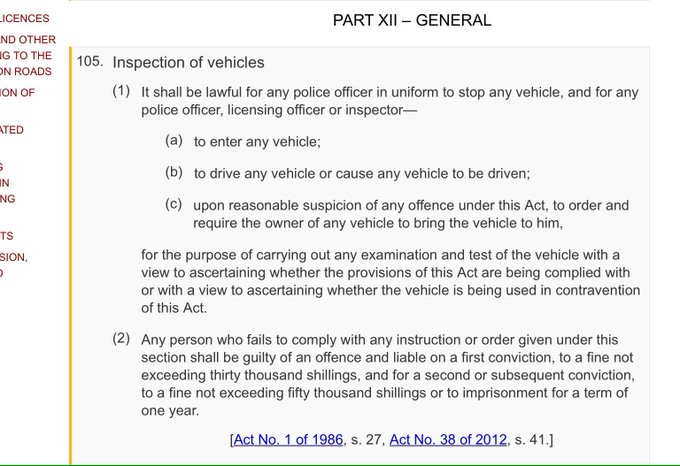 437 people are talking about this

Kenyans on Twitter were up in arms, terming the law as unfair and one that exposed drivers to harassment by traffic officers.On further digging, Standard Digital can ascertain that Section 105 of the Traffic offers a provision for police officers to enter into one’s vehicle if they suspect an offence has been committed.Failure to comply would attract a fine of not more than Sh30,000 on a first offence or Sh50,000 on a second offence  to an imprisonment term of one year.Under this law, there is no provision for a driver to insist that police officers must identify themselves.This has prompted motorists to worrying that this could lead to the misuse of Section 105 by criminals.The revelation comes just a few days after a video showing a confrontation between a taxi driver and two police officers went viral on Social Media.The video shows the driver insisting that the police officers had no right to be in his vehicle.When they demand to see his driver’s licence, he asks them to use the NTSA App, which according to the Transport Authority, is meant to ensure the validity of one’s driving licence.According to the Traffic Act “Any person driving a motor vehicle on a road shall carry his driving licence or provisional licence, and, on being so required by a police officer, produce it for examination”The Kenya Police therefore insists that one MUST provide a valid drivers’ licence upon the request of a police officer.Responding to a query by a social media user on Twitter, the Kenya Police Service was of the view that, there was no provision for the NTSA Application to act as a form of a valid drivers’ licence.This view was however faulted by some Kenyans who quoted Section 36 of the Act, which partly states, “…Driving licence or provisional licence’ includes such other evidence as will satisfy the police that there is no contravention of section 30”It has been a common belief, that drivers have 24 hours to provide their licences to authorities in the event that they do not have it on them physically.The traffic Act, however does not provide for such leniency, which means, Kenyan drivers might be forced to ensure that they carry their licenses at all times to avoid trouble with the law.Our efforts to get clarification on the NTSA application platform from both the National Transport and Safety Authority and the National Police Service proved futile.