It’s no longer mandatory to carry your driving license

It’s no longer mandatory to carry your driving license

If you are a licensed driver you will now be permitted to drive on Kenyan roads without physical licenses as long as you can prove by any other means that you are duly licensed.

This is according to According to the National Transport and Safety Authority (NTSA), which has further revealed that it has developed an application that enables one to verify the status of any driving license. This can be used as evidence that one is duly licensed.

“Section 36 (2) of the Traffic Act allows motorists to produce other evidence to satisfy the police that the motorist is duly licensed as per the requirements of Section 30,” NTSA said in a statement.

Section 36 (2) of the Traffic Act states a driving license or provisional license include such other evidence as will satisfy the police that there is no contravention of Section 30, which basically requires a driver to have a valid license. 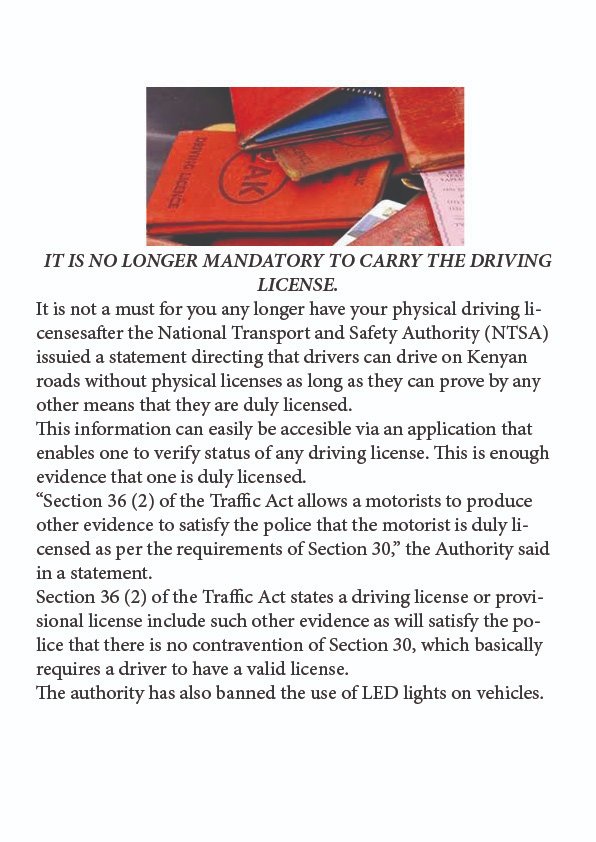 “To this end, NTSA has developed an application that enables one to verify the status of any driving license and this can be used as evidence that a motorist is duly licensed,” the NTSA said.

The NTSA had also earlier clarified that although all public service vehicles (PSVs) are expected to have first aid kits and fire extinguishers, it was not mandatory for private motorists to have the same.

“Section 55 of the Traffic Rules is clear that only PSVs are required to carry fire extinguishers and first aid kits. Private vehicles are only required to have lifesavers,” NTSA said. The authority has also banned the use of LED lights on vehicles.

Use the SMS code number 22846 to verify documents issued by NTSA and follow the easy steps given.